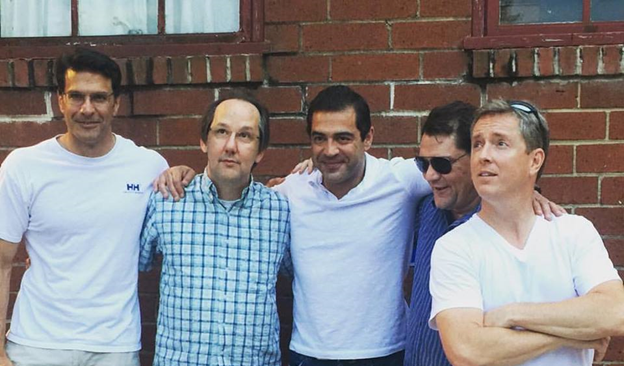 If you’ve ever frequented the 40 Watt Club, the Uptown Lounge, Georgia Theatre, dined at Weaver D’s, or just love the Athens music scene, then you are in for a treat on August 20th on the Dalton Green at the corner of Waugh St. and Thornton Ave., in downtown Dalton, GA.

Appearing around 7:30pm, this will be a great way to close out the summer. You don’t want to miss this show!

CLICK HERE TO PURCHASE TICKETS AND SAVE $4 PER TICKET

Some roads are less traveled for a reason. Others go on forever. CONNECTOR3 proves even that even really short country roads can take you home.

CONNECTOR3 is a new band including Dalton natives Mike Sain (vocals and bass) and Clay Fuller (lead guitar) who spent nearly eight years playing roughly 200 shows a year around the country with Athens, Georgia based ALLGOOD. From 1987-1995 Allgood appeared with Widespread Panic, Dave Mathews Band, Blues Traveler, Phish, the Allman Brothers Band, Neil Young, and Pinkard-n-Bowden. Allgood, a blues based rock band, was part of the emerging jamband scene of the early 1990s. They played on the 1993 H.O.R.D.E tour and made several records, including three for A&M Records.

But before that, Fuller and Mike Sain were in a Dalton-born cover band where they learned their chops and got a first greasy taste of life on the road around the southeast. In 1985 four young men put aside the distractions of Canned Sound and Funway USA and set out to prove that “Dalton Does Wonders” by playing classic rock with enough attitude to make it unwise to even mention the band at the Brookwood Ballyhoo. Along with Mike Sain and Fuller, the LOVE PUPS feature fellow Daltonians Brian Bulger (guitar) and Clay Cline (drums). The band will make its first appearance in 30 years at the Friendship House Music Festival to open CONNECTOR3’s set. Waiting for the return of Halley’s comet in 2061 seems overly confident.

But just as the real CONNECTOR3 ties the Midget-Grocery-and-dye-house-laden-memory lane that is the Dixie Highway to the pulsing, vibrant, yet mindnumbing I-75, CONNECTOR3 (the band) ties past to present by moving beyond the LOVE PUPS’ 1960s rock roots to breathe new life into other rock staples and by featuring appearances from other Dalton area musicians.

Riding shotgun for the entire trip is Bulger, who survived a multi-year stint as Allgood’s road manager and sound man. He is back to play guitar. Pat Sain, who performed with Bulger in the Dalton-based Penetrators, will play drums as CONNECTOR3 lays down kick asphalt rock through the heart of the Carpet Capital!